This article is a recap of a presentation I gave to my teammates, a brief introduction to Spring framework and related concepts, and 3 common Spring projects (Spring MVC, Spring Data JAP, and Spring Boot). 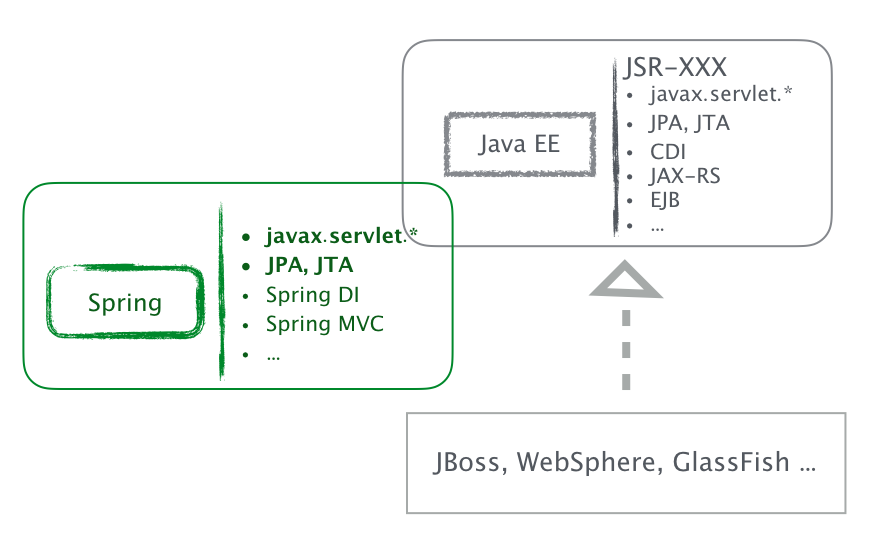 There are several Java EE implementations in the industry, all belong to IT giants, like IBM’s WebSphere Application Server (WAS), Oracle’s WebLogic, and JBoss which belongs to RedHat. They all comply to Java EE standards, and they all implement most of Java EE specifications like Servlet and JPA, and they mostly are called Application Servers since Java EE makes sure our applications can run upon. The open source alternatives of these application servers like Tomcat or Jetty are called Web Container, since they only implement Web related specifications such as Server spec and JSP specs. If we need dependency injection we bring in Spring, if we need to interact with relational databases, we bring in Hibernate.

At its core, the foundation concept of Spring Framework is DI (Dependency Injection) or a.k.a. IoC (Inversion of Control). These 2 abbreviations are really novice-unfriendly, and so require some explanations.

IoC is a theory, a technology, not only exist in Spring. Generally speaking, for some entity, the work/flow which this entity should initiate, turns out to this entity passively receive, this active-passive turnover is IoC. For example you want to write a small trivial program at work, at the beginning it’s a small program calling some 3rd party libraries, this is the active role your code is playing, as your trivial program grew bigger you import a framework to sort things out, your code becomes callbacks or interface implementations, now your code plays the passive role. With the help of IoC we can achieve decoupling, free our hands by relieving responsibilities.

For Spring IoC, it’s the responsibility of object instantiation and dependency tree maintenance that being shifted from our hands to Spring. For example, when we write Java application without Spring IoC, it could be like this:

It’s class A depends on Class B and Class C, we pass the objects of A and B through constructor and setter function. With the help of Spring IoC and some other Spring tricks, it could be like this: 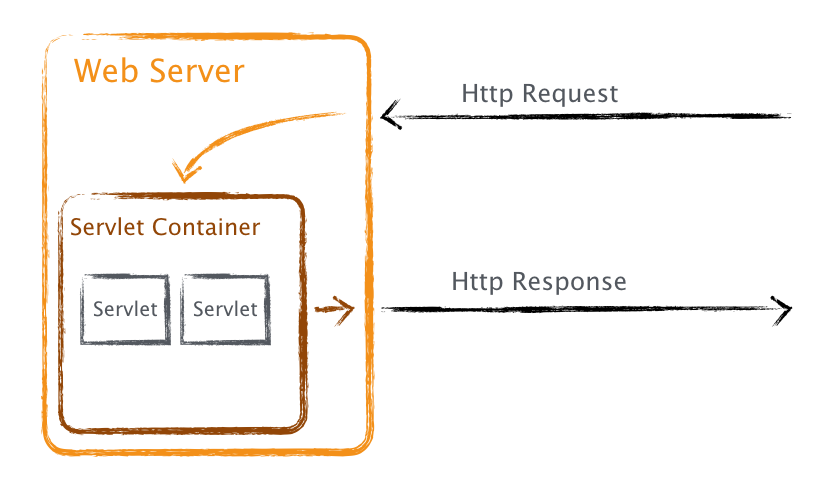 Spring framework consists of many modules, spring-core and spring-beans are at at core, spring-jdbc and spring-orm are responsible for database interaction etc. It’s too common to use Spring to build backend RESTful APIs, so it’s necessary to give a quick view of Spring Web MVC module.

With an extremely simplified Class Item, the terminal should look like this if we call the RESTful API with cURL

Spring has always been considered a framework, but in recent years it’s more like a portfolio, contains dozens of projects, all based on original Spring framework but provide various abundant features, Spring Data is one of them. Spring Data provides consistent, elegant, and easy-to-use interfaces to access persistent facilities, and Spring Data JPA is one of the modules specifically deal with relational databases. As we can see soon, Spring Data JPA provides a set of very tidy interfaces for us to implement routine CRUDs.

The following example demonstrates how Spring Data JPA simplifies the process of exposing CRUD interfaces to a simple data entity.

Given the table structure and Entity class:

Since CrudRepository already has common CRUD methods like save(S entity), findOne(ID id), exists(ID id) and delete(ID id), so now we only need to fill in some query methods specific to our need, as long as follow naming conventions[1]. For example, if we’d like to find all items with the same name, we can declare findByName here

Inject ItemRepository to wherever we need, then we are able to call these CURD methods directly.

How does Spring Data JPA do all the magic tricks? Well, it’s not that magic for Spring core. During Spring application bootup, Spring creates a proxy bean for ItemRepository interface at first with the help of Spring AOP, then in that proxy Spring parses all user-defined query method names and store ASTs on the bean. When these query methods get called in runtime, Spring AOP intercepts the method call, fetch the AST, assemble into a Query object combined with query parameters, then hand over to JPA. I give a more thorough analysis in another post.

Spring Boot is another Spring project, a Convention over Configuration follower and a relatively successful one. It has done a lot of work based on Spring which makes it much easier to build a Spring application.

In old days we need to list all depending artifacts in pom.xml or gradle.build, which is really annoying and cumbersome, Spring Boot thoughtfully gives us Spring Boot Starters, a one-stop-shop for all the Spring and related technology. It organizes related dependencies into groups from a Spring user’s perspective, we only need to include the group dependency descriptor artifactId in our pom.xml or build.gradle. For example when we develop a Spring Web application, generally we need to import Spring MVC, spring-web module, and Jackson etc, with Spring Boot we just import spring-boot-starter-web once for all. The same goes to spring-boot-starter-test which includes JUnit, Hamcrest and Mockito; and spring-boot-starter-data-jpa which includes everything related to relational database interaction.

Like I said before Spring Web applications need to put into Servlet containers in order to run, however, spring-boot-starter-web starter includes an embedded Tomcat, which can be started through SpringApplication.run() within our code in main function. In this way, our Spring Web applications are directly runnable via commandline, or IDE, or java -jar after packaged into a independent jar file.

In the previous post[[1](/spring-introduction-en)], I showed how brief it can be for Spring Data JPA to expose routine CRUD interfaces of simple database entities. This post goes a little bit further, by revealing the work Spring has done behind t...

As you may already know, VPN stands for Virtual Private Network, namely it is a private network, with many components being virtualized. From a user’s perspective, all we need is a virtual network interface (e.g. /dev/tun0) on my device and config...